Eyes healed, legs growing, miracles in Brazil and photos of damage in Nigeria 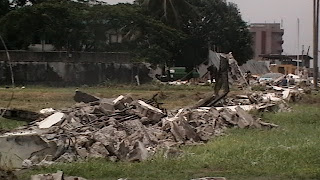 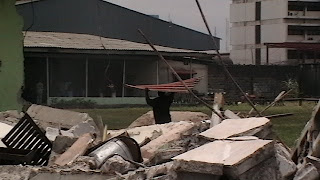 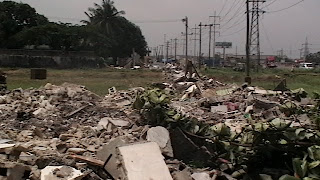 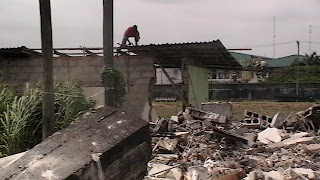 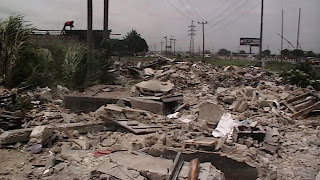 Jean Marc Montero Oliviera carries a strong healing anointing. This brother from Brazil travels the world releasing healing, prophecy, and teaches on the foundation of Jesus' love and the Father's heart and the power of the Holy Spirit.

Visit http:/cmmissions.net then click on missions, then overseas, then Brazil to read more.
JP

I´m very glad to be able to write to you this email because the truth of the matter is that we dont have internet where we are staying in Lavras.  We are staying at a beautiful country home.  It belongs to a dear friend of Jean Marc who is a business man. He has been blessing us with staying there for free, as well as free lunches at his restaurant.  To God be the Glory! We had a service last night at the property which includes a large soccer field, to commemorate Jean Marc´s birthday. (It was actually the 4th)

Tonight we traveled to a church about an hour away from Lavras, which unfortunately I cant remember the name right now and everyone is sleeping so I cant ask anyone. LOL! God moved in a POWERFUL WAY and MANY PEOPLE GOT HEALED!! Jean Marc didnt even get to preach because the Glory of God fell in that place so hard that the people began to be touched, just by him speaking about the Fathers Love for them.  Pretty powerful!  He called many to come up if they had a need and we prayed for many. Then he made an altar call and to our surprise about 35 to 40 of the people, from over 300 came up! Why a surprise, because no Word had been preached, but the miracles taking place was all that was neeeded.  He then called the sick to come forth and many came up.

A wonderful thing that began to happen was that many children were being touched under the power of the Holy Spirit!  They were weeping and crying and some of them were broken for their loved ones to be healed.  One boy`s leg grew out in front of us and his parents were touched greatly by God.  One girl around 12 years of age kept weeping under the anointing and one of the things that JM told her was that God was calling her to missions and that she will be going to the nations as a prophet and to heal the sick and that many signs, wonders, & miracles would be done by her. He then asked her if there was something wrong with her sister because she was holding on to her and crying and she said that her sister´s leg needed healing so he told her, you pray for her, God is giving you the anointing.  The girl prayed and praise the Lord her sister´s leg was healed by the Lord and the girl began to jump up, because she had not been able to do it before & and she walked normal after that! To God be the Glory!

Another girl`s vision was restored.  The interesting thing about that was that she was cross eyed and as Reggie and I laid hands on her, I could feel fire coming out of my hands and releasing healing on her and Reggie later told me that he could also feel God releasing healing.  What was interesting was that we expected the eyes to turn normal, but it didnt.  JM also laid hand on her and the eyes remained normal.  I was asking the Lord to help me understand what was happening to her, was it something else HE was doing because we could feel the power, but didnt see the manifestation.  After another missionary, Odaizio, who is from Brazil, received wisdom from the Lord to ask her mother what exactly is she suffering from and she said that her child does not see well without strong eyeglasses and when she sees with them on, she only sees large letters only.  Odaizio wrote the childs name in small letters on a pamphlet and without telling her what he wrote, he told her to read each letter, and miraculously she read every single one of them without the glasses and they were very small letters! The mom just cried, along with her big sister, thanking and praising God, To God be the Glory!  There were so many miracles that it would take all night to write!

Attached are some pictures from Dr. Margaret in Nigeria.  These pics are evidence of the attacks that are being done against them and is tearing down the fortified walls of the property as well as some of the small homes on the property that were attached to the walls!  PLEASE CONTINUE TO PRAY FOR THEM AND FOR THE LORD TO TURN ALL OF THIS AROUND FOR HIS OWN GOOD!! What the enemy steals from us, he will have to pay back in return 7 times.  I see a new and better compound being given to them.  AMEN! As I said before, as soon as I hear more I will let you know.  It seems strange to talk about something so sad and yet the blessings of what God is doing, but we know that trials and tribulations as well as praises and adoration are all part of the christian walk.  When James says, Consider it pure joy when you face trials of many kinds, it`s because there is blessings and perseverance as well as maturity that God is building in us.  We dont like it when we go through it, but later on see the purpose in our sufferings and our pain.  We love Dr. Margaret (Mummy as most call her) and are standing and believing God for the great harvest that is to come out of all this persecution.  To God be the Glory!

By the way,I took my son to a clinic yesterday.  It was not free because it wasnt the ER, but its okay, because at least we were in and out of there in about an hour.  The total damage, including the medications, came out to be almost 150 reais, which is about $75. He has a throat infection an a minor sinus infection.  But praise the Lord the fever finally broke yesterday afternoon and he has been much better now, and its not because of the antibiotics, but because of your prayers, TO GOD BE THE GLORY!  Please pray for the Lord to stretch our money, because we`ve had many espenditures, more than we expected, because of transportation and the food in our first part of our trip in Brasilia was very expensive!

We will be returning to Rio on Monday, and will having one last service in Salgueiro, the slums of Sao Goncalo.  I had the blessing of preaching a word in this wonderful neighborhood on Sunday morning and the power of God fell on that place with such a sweet spirit and many received inner healing here, but mostly many received an activation of gifting anointings over the lives.  The interesting thing that took place after, was that many of the ones that I had prayed for and prophesied and realeased words over, came together at the end to bless me and I ended receiving such powerful anointing over me that I ended up on the floor laughing so hard and receiving a refreshing by the Holy Spirit.  It was awesome! I say the neighborhood is wonderful because Jesus walks where no one else wants to be, with those that noone else wants to see.  In the evening the Lord did something great, I was consecrated and ordained as a missionary under the covering and anointing of Jean Marc`s ministry.  He had surprised me because it was supposed to be an ordination for Reggie, though he has a Doctorate, he wanted to be ordained under JM ministry, his spiritual dad.  I knew about Reggie`s surprise and he knew about mine, how funny! We then had a powerful service where many people were touched powerfully by the Hand of God!

How I wish to share more, but its well after 4 am here and I`m so excited to be able to write as much as I have.  These next 3 days, Friday to Sunday, we will be in a church where there is a great need and we know that God is going to move powerfully for His Glory!! I love you all and thank you for your prayers!

PLEASE DONT FORGET TO PRAY FOR BREAKTHROUGH AND FOR THE FATHER`S LOVE TO PERMEATE THE HEART OF THE MUSLIM LEADERS TO RELEASE THAT LAND TO UBCI, DR. MARGARET`S MINISTRY  AND FOR ALL THAT THE ENEMY HAS TAKEN FROM THEM BE RETURNED SEVEN FOLD!

Waking Up by Robin McMillan LAUGHING JESUS Posted: 31 Jan 2010 05:46 PM PST I picked this rendering of Jesus because He is laughing. (I don't know who drew it and apologize for using it without permission.) Most historic religious imagery of the Lord shows Him serene, serious, ethereal, other worldly, in agony, or sad. I know that He was the suffering Savior but he was also 'anointed with the oil of joy above his companions' (Hebrews 1:8-9). People need to see a laughing, joyful, happy Jesus to round out their understanding of God! Jesus is the source of our joy and as King of the universe, is seated on a throne having been anointed with joy. "Your throne, O God, is forever and ever; A scepter of righteousness is the scepter of Your kingdom. You love righteousness and hate wickedness; Therefore God, Your God, has anointed You With the oil of gladness more than Your companions" (Psalms 45:6-7). In Acts 2:15-21 Peter defends th
Read more

Oh WoW!!!!   Healing river flowing in the UK     Sorry it's been so long since our last update; we haven't had much time to write but God is doing amazing things.   In this newsletter: Miracles in the café New shop in Chester Presence of Jesus More miracles, salvations, healings and deliverance Holy Spirit high is better than drugs! Demons flee   Here are just some of the recent miracles Jesus is doing here in Chester, UK….     Taxi driver feels something leave his body!   On Friday in the café we met a taxi driver who came in with his grown-up daughter. She'd been in last week and we'd prayed for her and her friend. They'd both felt the presence of Jesus really strongly and she'd told her Dad who didn't believe her! He agreed to come into the café with her yesterday as he'd seen her circumstances change for the better since we prayed last week. He told us he had diabetes. We invited the Holy Spirit and commanded the diabetes to leave his body. He s
Read more