Showing posts from September, 2010
Show all

Dear beloved Rev. Jorge Greetings to you in the precious and wonderful name of our Lord and saviour Jesus Christ. I am very much delighted to let you know that we had wonderful and REVIVAL Fasting and Prayer meetings last week from 22 nd to 24 th . There are nearly about 300 people came together from local churches to pray and spend time in the presence of the Lord. We have prayed for the people who are in problems, sick and for the new souls to be added into the body of Christ. We had wonderful time of Preaching from 3 guests speaks who were filled with Holy Ghost and led us in prayer and Preaching.   As I mentioned in my previous email, I have asked our churches to pray for you and ministry for your upcoming trip and we all have prayed for you. I hope you have prayed for the success of our meetings. Well as the result of your prayers and meetings there were 8 new people were have taken WATER BAPTISM and they were added into the body of Christ. Thank you for your
Read more

Vanuatu: Terri Morrow writes, "What if YOU said yes!" 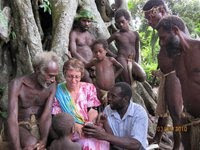 What if YOU said "Yes?"   That is precisely what Terri Morrow of Franklin, North Carolina did. A self described "granny," the married mother of three daughters and   two grandchildren, responded to the mandate of Christ to go into all the world with a simple "Yes, Lord." It was upon that call that Terri began Walk on Water Ministries when she heard the Spirit urging her to get out of the boat and do the seemingly impossible. What she has discovered is that now that she has said, "Yes;" God meets her every time she steps out! Terri had served the Lord as an Area Representative with Voice of the Martyrs for a number of years. But sensing God was initiating a change, she began to familiarize herself with the island nations of the world. In so doing, the Lord began to speak to her regarding the small nation of Vanuatu; a group of small islands of the South Pacific approximately 1000 miles east of northern Australia. About two years ago as T
Read more

News from Jason and Angie in Guatemala-Coming to Harvest Fest at MorningStar Sept. 29.

WE PREACHED IN A CATHOLIC CHURCH!  Yesterday we returned to Guadalupe, a mountain village that is very difficult to get to, (the dirt roads and rivers we have to cross are extreme) and the pastor of the only church there, (catholic) has given us his church to minister in!  Remember the Catholic Church here is nothing like it is in the US.  Christians and Catholics here are at war here in many areas and Catholicism is around 90% in Guatemala.       We are inside the church and ministered with dolls that have to faces, one face sad which tells the story before Jesus and one face happy that reflects after she found Jesus.     Guadalupe is the second most beautiful village we have been to.  The colors and beauty are amazing J     Ahhhhhh…     The man sitting down in front has chronic arthritis and can hardly walk.  The Lord touched him in a big way in the church service and he came with us hut to hut to minister to others.  We are standing w
Read more

Jai and Yori in India feed hundreds of flood victims in E. India-Photos too. 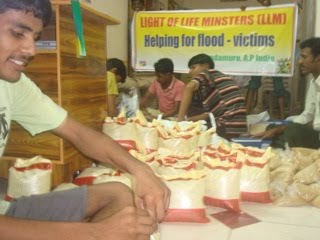 Rea ching hundreds of souls in midst of great struggles...pictures Dr.Jorge and mother Anna Marie,       We are very much thankful to you for all your prayers for the flood victims who are being suffered a lot due to cyclone hit and devastated-floods few days back here in     south part of India.        Spontaneously     our LLM gospel team has taken     this devastation     an opportunity to share the gospel     for the flood victims. We could help out 150 poor and effected victims in three villages called "Nanadamuru, Arulla and Marampalli'.     Not only helping them food packets, and also we could share the GOSPEL     with some gospel book-lets and     distribute the New Testament Bibles for     the flood victims.      IT WAS A GREAT OPPORTUNITY AND OPEN DOOR FOR SHARING THE GOSPEL TO THE NON-BELIEVERS IN THE TIME OF NEED. MANY OF THEM OPENED TO THE GOSPEL. PRAISE GOD!!!         There was no support from any where, by faith we could step out into the field, our orphanage bo
Read more
More posts