Showing posts from January, 2011
Show all

By CMM.World CMMTheology.org - January 14, 2011
Pray for Brazil!   Dear Pastors & Friends,   I wanted to give you an update on the conditions in Brazil. I spoke with Jean Marc again today and he shared with me the serious conditions that are taking place in the Northern part of the state of Rio de Janeiro.   They are asking the nations to pray for the serious devastation that is taking place in that region right now. Jean Marc told me that it's one of the most serious catastrophies that Brazil has ever encountered. As you have probably seen or heard on the news, more than 500 persons have been killed with the flooding and mudslides as of today. He told me that this situation would be compared to what happened with Hurricane Katrina's devastation with the flooding. Of course we know many more died in Katrina, but the realities of a third country are much more difficult.   The hospitals there are not able to handle the many bodies that are coming in and many have had to be numbered and buried for fear of spreading o
Read more

Pakistan Governor murdered because of his support of Christian women on trial.

PAKISTAN http://win1040.com/post1004/PAKISTAN.html   SUMMARY:   The governor of Punjab, Pakistan, Salmaan Taseer, was assassinated by one of his own guards on January 4, 2011. Taseer had spoken out against the nation's blasphemy laws and was a supporter of Asia Bibi, a Christian woman imprisoned for blasphemy and facing the death sentence. Salmaan Taseer, governor of Pakistan's most populous province, was gunned down by a member of his team of guards on January 4, 2011. His death comes three years after former Prime Minister Benazir Bhutto was assassinated. Taseer was considered "one of [Bhutto's] most prominent supporters." Taseer's killer said he committed this murder as "punishment for a blasphemer." The governor had spoken out about Pakistan's vaguely worded blasphemy laws, calling them harsh and unfair. "These laws are used to victimize Christians and other groups," Taseer said. He was one of only a few officials in Pakistan
Read more

New Church in India dedication Feb 1 with Jai and Yori 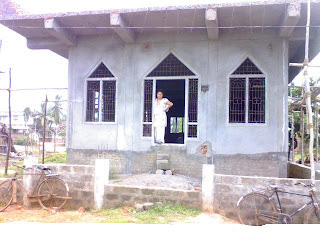 Dr.Jorge and mother Anna Marie,   We are very much rejoicing in the Lord for informing you that our Church dedication is going to be held on 1st of Feb.   We are more than happy to share with you that two young people gave their lives to Jesus and got the water baptism.   We have not completed the building perfectly. God has been so faithful for past one and half year of worshiping on the road side in the heat, rain and  cold. We are going through so many discomforts to worship the Lord among Hindu community.   WE WOULD LIKE TO HAVE YOU AND YOUR TEAM FOR THIS DEDICATION. PLEASE DO PRAY ABOUT IT AND LET US KNOW AS SOON AS POSSIBLE. THANKS.                 In His field,                your son and daughter in Christ,                      Jai&Yori. URGENT NEED AND PRAYER REQUESTS:     1. Still at least we want to build the toilets, and fix doors and electricity before we dedicate it. These are main basic needs.    Please...please... try to send some  funds to fix the doors
Read more

Dear Family and Friends, I am in Haiti and doing fine. This is the first time I have internet here or I would have gotten a message out sooner. I am staying at Pastor Vincent's house, same place I stayed at in May, in a tent. The 34 orphans, who live here now, are already teaching me Creole an French. I attached a picture I just took of me and Wendy (Went-zy) the youngest boy here. Later this morning we are picking up Fresh Fire Ministries at the airport for their week long crusade that starts next week. Thank you all for helping me get here and for all your prayers. I Will write more soon but have to get going now. If you want to contact me send me an email and I will get back to you as soon as possible. God Bless, Nathan Dodge -- "God has not given us a spirit of fear, but of power and love and discipline."                                                    2 Timothy 1:7 "The joy of the Lord is my strength."
Read more

By CMM.World CMMTheology.org - January 04, 2011
Dear sir, Please pray for us. please see our trip to border of Bangladesh and Myanmar in December 2010. last years the mouse destroy many rices in border of Bangladesh and Myanmar. they need rice for their lives. some people are kill mouse and eat it. I too eat. some tribe people does not have food so they went to jungle and kill monkey , viper and mouse  and eat it.  to unreached village, we spend four days  by foot to reached their village. there is no transportation at all. no churches, no school. But I believes that we can reach this people by the power of Holy Spirit and the power of gospel. they need Jesus. they need your prayer support. will you like to come and see this people. But you need to walk four days or five days by foot. thank you for standing for us and with us. Name withheld protecting our precious missionary. ***if you want to help dear friends breaking into cultures with the love of God, write Myanmar on your check and mail to CMM PO 7705 Charlotte, NC 28241 o
Read more
More posts